We have been working hard to make vessel-mounted current measurements and related data processing even easier. Here are the latest improvements to our Signature VM package:

Let’s start with data acquisition using the Acquisition Software. Users came back to us that not enough of the data was visible on screen, saying that it would be better to have a cleaner interface where elements that are not always necessary are not shown all the time. In our enthusiasm we had put too much detail on the screen in earlier versions.

The new version has been restyled. The buttons that allow you to configure and start are now in a pane on the left and are always visible. The colors displayed show the status. See the video below, in which we show how to connect to the sensors, configure the instrument and start the measurement.

In addition, there have been some smaller changes:

See this short video on the functionality Signature VM software.

Users also reported some issues with the Review Software:

It would be nice if all of this could be easier.

The new version of the Review Software has a lot of improvements. The most obvious one is the integration of several chart systems, e.g. Google Maps, in the software. From that you can save an acceptable GeoTIFF file that you can directly use in VMT using the Map menu. The “world file” is automatically generated for you. 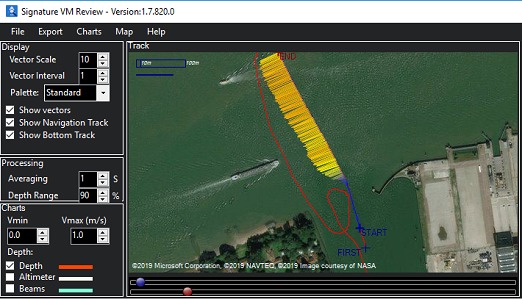 Selecting the right part of the data for analysis and export is now made easier by two sliders (blue and red) just below the map – hard to describe in words but easy in practice.

Other features that make processing easier:

An important problem that users reported was that the GNSS Heading output needs a long startup time. Advanced Navigation has improved the firmware. The startup time has now been shortened a lot, so you can get going much more quickly than before.

Last but not least, there were some issues with the functionality of the Signature ADCP itself. The altimeter functionality was not yet fully realized and time synchronization through PTP was not as stable as it should have been, making it sometimes difficult to start.

PTP works fine now. The instrument properly keeps the settings and is synchronized with the GNSS time with nanosecond accuracy.

The altimeter is now fully functional and it meets the specifications; we will be publishing a report in the coming months. The precision is better than 1% – as good as it gets at 1 MHz. The altimeter benefits from a new version of the electronics in the Signature. The dynamic range is increased very significantly. The echosounder functionality will show improvements due to the improved dynamic range also, but more on that in the next Signature VM update!