Nortek’s tech expert David Velasco outlines the three main methods that exist to measure water speed with acoustics, and explains why the Pulse Coherent Doppler method must be used thoughtfully if you want accurate and precise data.

Listening to a great guitar player like Eric Clapton or the late George Harrison always mesmerizes me. The skill with which they use their instrument is simply magical, and the result is pure joy. But put Clapton’s Fender Stratocaster in my hands and instead you’ll hear what can probably best be described as a couple of cats fighting inside a burlap bag. Conversely, you couldn’t expect to hear a perfect rendition of “While My Guitar Gently Weeps” if you had given Harrison a plastic toy guitar. So not only do you need the best tool for the job, you also need the power to wield it.

In the world of commercial ADCPs, we have a similar situation, as multiple methods exist to measure water speed with acoustics, and these must be skillfully wielded if you want accurate and precise data.

The three methods for measuring water speed with acoustics

Of all the methods available, three are widely used in commercial ADCPs. The Doppler industry is not really good at using standardized nomenclature, so let’s just called these methods Narrowband, Broadband and Pulse Coherent (aka “High Resolution” or “HR”). And let’s offer the overly simplistic definition: Narrowband systems compute speed from the echo of a single acoustic pulse; Broadband systems do so by using pairs of pulses that are often in the water at the same time; and Pulse Coherent systems use pairs of pulses separated by a time lag such that they are not in the water at the same time.

Finally, let’s summarize their strengths and weaknesses as a function of profiling range (how far away from the instrument you want to measure) and velocity (how fast the water is moving). The illustration below shows the general relationship: Narrowband systems are great when the range is long and the velocity is fast; Pulse Coherent systems are great when the range is short and the velocity is slow; Broadband systems are somewhere in the middle. 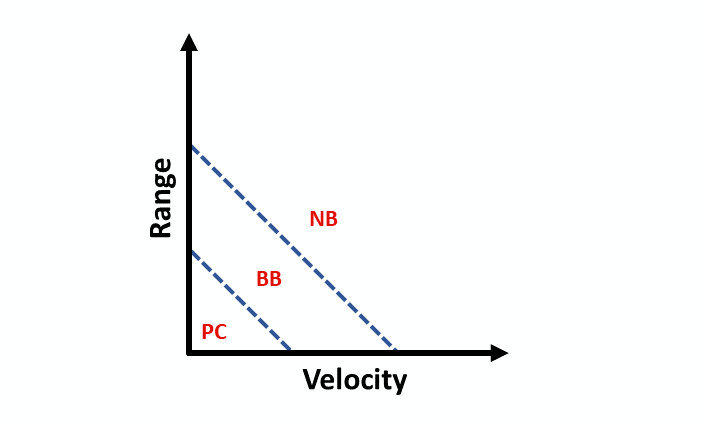 Simplified representation of the relationship between the three main acoustic Doppler methods as a function of range and water velocity.

The strength of Pulse Coherent (or HR mode) systems

At this point I must add that the complexity of the hardware and signal processing methods increases as you move from Narrowband to Broadband to Pulse Coherent systems. So why would anyone bother with a Pulse Coherent system? That’s simple: because Pulse Coherent offers such an excellent time-space resolution that it is the apex predator of the ADCP kingdom. No other acoustic technology comes close in terms of bringing water movement to life with such clarity that the data looks almost like a work of art (e.g. Fig. 2). 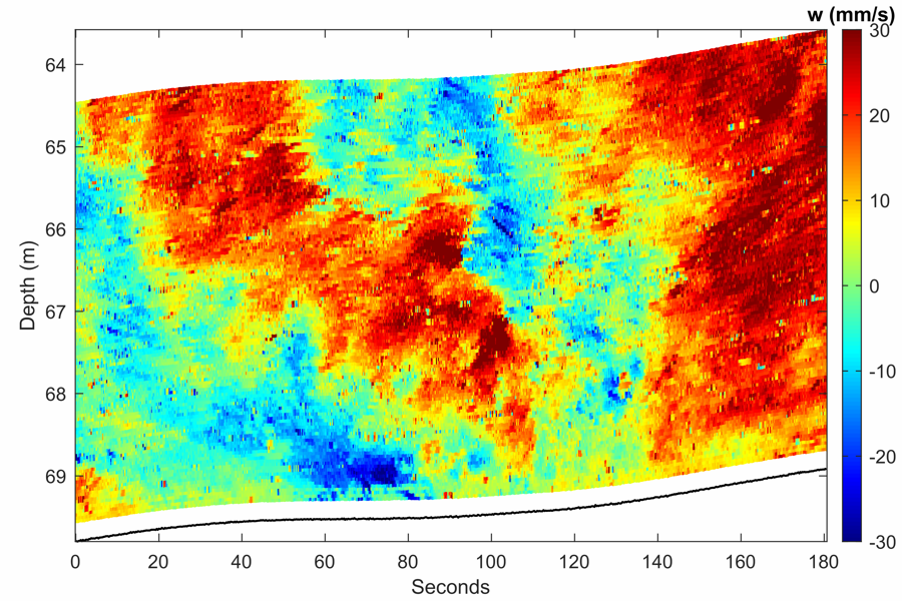 Example of vertical velocity measured by a Nortek Signature1000 operating in Pulse Coherent (HR) mode (courtesy of A. Shcherbina and E. D’Asaro – UW/APL).

The pitfalls and limitations of traditional Pulse Coherent systems

But, just as Spider-Man warned us, with great power comes great responsibility. When used incorrectly – or worse, when poorly implemented in an ADCP – Pulse Coherent can generate disastrous results. In fact, I’ve seen entire datasets destroyed when the technology is not wielded with skill. The core reason is that the Pulse Coherent method uses the phase difference between the pulses in a pulse pair to measure the velocity, and phase can only be unambiguously determined within ± π (or ± 180° in terms of degrees).

To visualize this, imagine I show you a stationary wheel, and then ask you to close your eyes. I then spin the wheel one full revolution, but don’t tell you that I spun the wheel. When I ask you to open your eyes and look at the wheel again, you cannot tell me, just by looking at the wheel, whether I spun it just one revolution or many revolutions, or even if I moved the wheel at all!

Now imagine that instead, I spun the wheel less than one full revolution and asked you to measure how much I spun it. Your chances of getting the most precise measurement (i.e. high repeatability) would be if the wheel was spun close to, but not fully, one revolution. In terms of the Pulse Coherent method, this is what we call the time lag between the two pulses in a pulse pair.

So increasing this time lag increases the velocity precision, but at the expense of the maximum measurable velocity (called “ambiguity velocity”). This is because the system must wait until the first pulse has died out enough before sending the second pulse in the pair, so that they don’t interfere with each other; the longer you wait, the slower the velocity you can resolve. Should the actual flow increase beyond this ambiguity velocity, the final computed velocity will “wrap”, as shown by the black line on the figure below. In order to make this velocity usable, this data must be “unwrapped” (e.g. as shown by the red line below).

Example of phase wrapping in a velocity time series collected from a Pulse Coherent system. The true velocity is in red, while the wrapped velocity is in black.

Mathematically, the unwrapping process is rather straightforward, especially if the jump is as obvious as in Fig. 3. However, what if you are in a turbulent flow and the jump is more subtle, so that it cannot be so easily discerned? Or worse, what if the jump is so severe (in relation to the ambiguity velocity) that instead of the velocity wrapping around just once (as in Fig. 3), it wraps two or three or more times? How would you know how much to unwrap, or how to tell “good” velocity from “bad” velocity? So, in practice, this means that Pulse Coherent systems are confined to either very slow-moving water (a few cm/s), or very short ranges (often less than 1–2 m).

But researchers want to have their cake and eat it too! And so do I. Slow and/or short is boring. They want to capture faster velocities and longer ranges. So with that in mind, Nortek has implemented a novel approach to improve on this age-old limitation of the mighty Pulse Coherent system: the Multi Correlation Pulse Coherent method.

Invented by Nortek engineers as part of the development of an advanced Single-Point Current Meter, the Multi Correlation Pulse Coherent (MCPC) method works to expand the application beyond what traditional Pulse Coherent systems have been able to achieve. In a standard Pulse Coherent system, a nominal time lag is used to separate the first pulse from the second pulse in a pulse pair, and a statistical parameter called Complex Autocorrelation (“Correlation” for short) is computed, which quantifies how similar the first pulse is to the second pulse. The more similar they are, the better the data quality.

The novel aspect in the MCPC method is that the correlation is computed not only at the nominal time lag, but also at a few different instances just before and just after the nominal time lag (i.e. a few microseconds to both sides of the lag). This allows for a coarse, yet robust, estimate of the velocity to be computed.

Because now we have a robust estimate of the velocity, we can then use this not only to unwrap any samples that may be wrapped, but also to indicate how many times it may have wrapped (up to a practical limit). Going back to the spinning wheel illustration, now you know how many complete revolutions the wheel has gone through.

The MCPC method is used on the Nortek Signature1000 ADCP mounted on this Lagragian Float developed by the University of Washington’s Applied Physics Lab (UW-APL). Details on the float can be found in the paper at https://journals.ametsoc.org/d... – where it is shown as “FIG. 1”.

Furthermore, because only a single pulse pair is actually being used (as opposed to sending multiple pulse pairs, each at different lags, and then taking the best one, as has been implemented in other systems), the MCPC method allows for maximum sampling rates to be achieved, because no time is wasted on pulse pairs that are never used.

Finally, the method allows for the velocity measurement with the best correlation to be used, further improving data quality. MCPC has been implemented in the Signature1000 systemswith the HR (High Resolution) option, and there it is called the Extended Velocity Range (EVR). Many successful deployments of the technology have been used in the field, with some published work listed here:

Nortek has once again proven its capabilities by developing innovating products and solutions to some of the world’s most challenging physical oceanography measuring problems. The exclusive Multi Correlation Pulse Coherent method greatly expands the might of the Pulse Coherent technology, providing scientists not only with the best tool for the job, but also the ability to skillfully wield it. But great as it is, it still won’t help me with my aspirations of being as good a guitarist as Eric or George.