Preventing biofouling on ADCPs deployed in the field

Biofouling is a problem that may not come top of all marine scientists’ priorities when preparing underwater instruments for deployment. However, in some conditions, it is an issue that requires careful consideration, if sensitive equipment is to work to its full potential and require less maintenance. Now, though, it seems that field researchers at Spain’s Universitat Politècnica de Catalunya and Texas A&M University in the USA have found a practical solution to prevent biofouling on ADCPs.

First of all, some background on the phenomenon itself:

Biofouling occurs when marine organisms build up on submerged surfaces, such as the underside of ships, underwater structures and technical instruments. A thin layer of organic molecules adsorbed on to the surface of an instrument may seem relatively harmless, but that facilitates the attachment of micro-organisms, such as bacteria or algae. These in turn may act as bait for larger organisms such as barnacles, mussels and sponges, as well as more mobile creatures such as crabs, shrimps and snails.

Before you know it, subsea equipment can be covered and potentially rendered useless, requiring a time-consuming and possibly costly extraction and clean-up operation.

One long-standing approach has been to smear the transducer with zinc oxide paste. This is known to many as the stuff used by parents to alleviate baby’s diaper rash, but it is also a biocide widely used in marine industries to deter the build-up of micro-organisms.

However, zinc paste can wash off submerged surfaces over time, reducing its effectiveness, and, potentially, that of the transducer.

Therefore, Nortek wanted to introduce its users to a more recently developed and potentially more effective technique – the application of silicone-based stickers to the transducer windows. The surface of these stickers is hard for micro-organisms to adhere to, enabling marine life to be washed away more easily when water flows over the transducer.

Nortek believed that these stickers worked better than zinc paste but wanted to find out what its customers thought. So, the company sent stickers made by the Japanese company Nitto to ADCP users to try out in some projects where biofouling was a significant problem. The stickers were provided pre-cut to fit Nortek equipment, but they can be applied in many configurations up to 50 cm wide.

Meeting the challenge of biofouling on ADCPs in Texas waters

William Fuller is a graduate researcher working as part of a team at Texas A&M University (TAMU) headed by Dr Jens Figlus. The team has been deploying two Nortek Aquadopp current profilers as part of a project in Galveston Bay that is assessing the hydrodynamic impact of turbulence caused by the wakes of large ships using the nearby Houston Ship Channel on dykes being built in the area to protect wetlands.

Given the warm water and periodic intense currents created by these ship wakes, which churn up marine life, biofouling can be a serious problem in the area.

While zinc paste – the project’s usual method – worked fine in combating biofouling in late winter and early spring, the team noticed it became less effective later in the year as the water heated up and the paste became eroded.

So Fuller was happy to try out the Nitto stickers, applying them to one of the project’s profilers, while using Desitin zinc oxide paste on the other ADCP for comparison.

The photos in Fig 1 show the two ADCPs with zinc paste and stickers prior to deployment. They were then installed on a research platform in roughly 1 m of water on the edge of Atkinson Island in Galveston Bay (see map). The water had an average temperature of around 28 °C.

Following a deployment lasting 36 days from 26 April to 31 May 2018, the transducers covered with stickers were relatively clear of biofouling, while those covered in zinc paste were obscured by organic material, as shown below.

Because the two techniques were deployed on separate ADCPs, albeit in close proximity, and there was no unprotected ADCP in the test, this does not represent a full controlled experiment. However, the difference in the extent of biofouling is clear to see.

“The stickers worked head and shoulders better than the zinc paste,” Fuller says.

The ease with which the stickers could usually be applied and removed also meant that cleaning up the current profiler’s transducers required less time and was more straightforward than using zinc paste.

“The transducers are the most valuable part of the instrument, so the less time you spend around them, the better,” he adds.

Biofouling prevention on ADCPs deployed in the Mediterranean

Nortek also asked scientists at the Universitat Politècnica de Catalunya (UPC) working on OBSEA – a project to develop an expandable undersea observatory – to test stickers on their eight-year-old Nortek AWAC current profiler and wave measurement device. The AWAC is one of a number of instruments on the observatory measuring different facets of the marine environment from salinity to seismic activity, as well as current and wave motion.

Located at a depth of 20 m some 4 km from the shore at Vilanova near Barcelona in warm Mediterranean waters, OBSEA suffers a notable degree of biofouling, so it made a good testing ground for stickers.

The scientists covered three of the four transducers on the AWAC with stickers, leaving the other one without any protection. They then installed the profiler on the observatory on 17 April 2018.

After two months in the water, the benefits of stickers were already clear to see, as the photo below shows.

“The stickers are a real success for us, because it means we need to do less maintenance,” says Dr Joaquín del Río, a leading scientist on the OBSEA project. “The cost of the stickers would easily be covered by the savings on maintenance.”

Before the project started using stickers, the AWAC had to be removed from the observatory and returned to the lab for thorough cleaning after six months at the end of every summer. With reduced biofouling on the transducers, it should be possible just to change the stickers on a boat at the observatory site before redeployment, without needing to take the AWAC back to shore as frequently.

Del Río says he has noticed no reduction in performance of the AWAC when using stickers, though the team had yet to do a detailed analysis of this aspect of the data.

Back at TAMU, William Fuller is also impressed by the results. He says a preliminary comparison of the data from transducers covered with stickers and those covered with zinc paste in the Galveston Bay test suggested that those covered by stickers appeared to provide slightly more detailed profiling results overall. While he stressed that more data processing was needed to confirm that finding, he said there was certainly no obvious evidence that the stickers had any negative impact on performance.

“I plan to stop using the zinc paste and only use the stickers moving forward,” he says.

The evidence from these two customer stories suggests that using stickers provides an easy-to-use alternative for combating biofouling on current profilers, simplifying maintenance, while maintaining performance.

The stickers are designed to be easy to apply and peel off, and they require no time to dry after application. The stickers are also eco-friendly, according to its producer Nitto, as they are free from the biocides used in zinc paste.

The numbers are still being crunched by Nortek’s customers, but the early results and anecdotal evidence seem to confirm that stickers are a valuable new piece of kit in the marine scientist’s toolbox.

Set of Anti-fouling patches for Aquadopp

Set of Anti-fouling patches for Signature1000

This set is suitable for Signature1000

Set of Anti-fouling patches for Signature500

This set is suitable for Signature500

This set is suitable for AWAC 1MHz

This set is suitable for AWAC 600kHz

This set is suitable for Aquadopp Profiler Z-cell 1 MHz 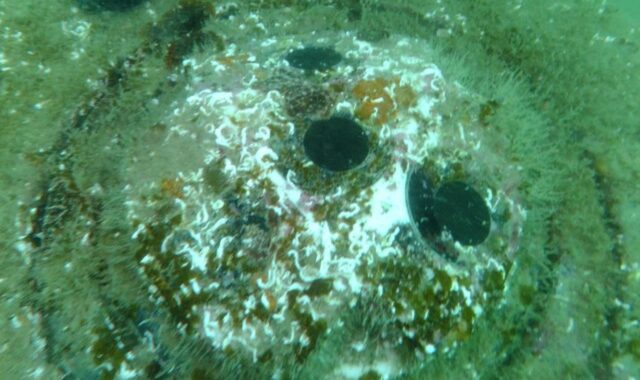 How to combat biofouling and extend your deployment