Nortek was included in the TTT3 program with Queen’s University Belfast in the dynamic Strangford Narrows in Northern Ireland. The TTT3 project was the third round of the international program forTesting Tidal Turbines. TTT3 built upon the experience and results from deployment of two 1/10th scale horizontal-axis tidal turbines.

The Nortek Signature1000 ADCP was selected for mean flow and turbulent kinetic energy (TKE) measurements because of its high accuracy and maximum sampling rate of 16 Hz.

The Nortek Signature1000 was located upstream of the turbine’s rotor in accordance with the IEC 62600-200 standard. The high-resolution turbulent kinetic energy and mean velocity measurements provided by the instrument were synchronized with the turbine’s torque and thrust performance.

Flow characteristics in the wake of the turbine were also a key part of this project. The Nortek Signature1000 was mounted downstream of the rotor, enabling a comparison between the free stream flow and flow in the turbine’s wake. To accomplish this, the Signature1000 was deployed from the barge pointing downwards, 0.5 m below the surface, recording the entire water column currents to the seabed 10 m below the surface. 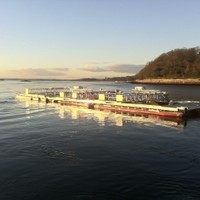 The Signature1000 may also be used in a bottom frame for resource assessment according to the IEC 62600-200 standard. The five beams featured on the Signature1000 offer improved vertical current velocity measurements and the ability to resolve smaller turbulence length scales in the vertical axis. The Signature1000 has excellent spatial and temporal resolution, making it very appropriate for this project. With a cell size of 0.2 m and 16 Hz sampling frequency it captured the flow experienced upstream and downstream of the turbine in great detail.